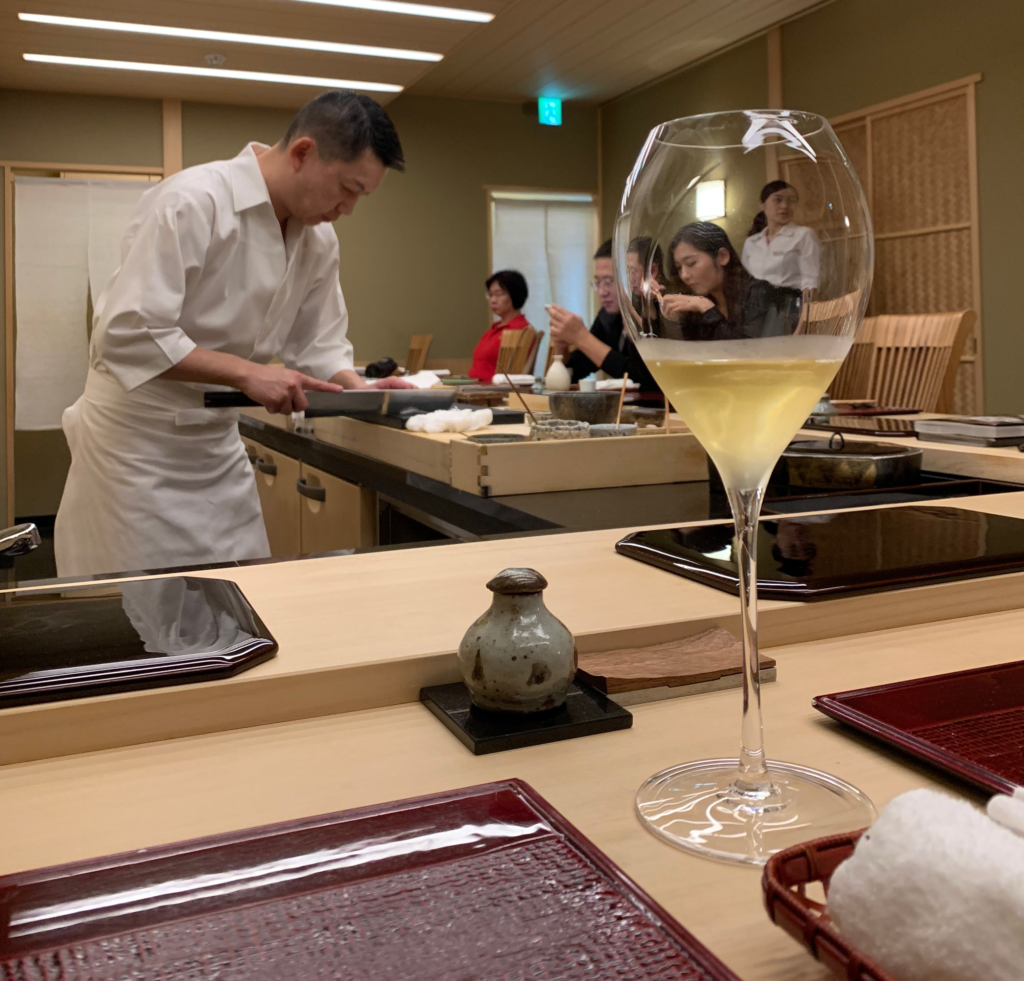 No other form of dining epitomizes the "one man show" as much as omakase.

If critics of the screen and stage can single out individual actors for praise and criticism, then why can’t restaurant critics? Surely, there is much more on the line when paying $100, $200, $300 or more for a tasting menu relative to the price of entry for most visual entertainment.

As flavor increasingly takes a backseat to the spectacle of presentation, people-watching, and “eat-with-your-eyes” Instagram posting, service staff does far more than simply drop off plates. In the most hallowed, hushed fine dining establishments, whatever energy the host or hostess and then the server possesses with quite poignantly set the tone for the entire experience. At least, one hopes, until the food itself has its say. Often, of course, it is not so simple.

Any diner who has spent time reading over Yelp reviews has likely noticed a certain species of critique. The fare itself receives a passing grade–perhaps even meriting praise. As does the location, the ambiance, the overall value, and the libations. In fact, the evening would have been perfect if not for some imagined slight from the service staff. And perhaps that eye roll, that rejected request, that slight misstep in timing or accurately taking the order did happen. But such a reviewer is all-too-happy to dish out a single-star review for what would have been remedied in the moment with the appropriate managerial engagement and oversight.

Yet it feels good, on occasion, to stoke the hatred burning inside of us. We do not want to have it made up to us because we demand perfection, and a perfectly nice evening was already ruined. There are no second trips to the Broadway show, so each member of the cast had better nail their lines. And, should they stumble, they had better cartwheel into a movement even more spectacular, so as to erase any memory of the mistake altogether.

That, I suppose, is the essence of what I am talking about. Not appraising hospitality employees on the perfection with which they play their part, for the art form is essentially, irrevocably interactive and essentially attached to the deeply flawed nature of any given guest. Rather, the performance of which I speak is more like that of the carnival contortionist, who amazes by their ability to bend and twist far beyond the crowd’s expectations. Those expectations, of course, are individually held. Some tables may be more than willing to meet their server halfway, to work with the staff so that the needs of all parties involved go met. Other diners, particularly those skeptical of fine dining (or altogether jaded from far too much of it), maintain a set of trials and tests that any would-be waiter or waitress must pass with flying colors to avoid a complaint to their manager and a cut taken from their tip.

I know what you are thinking, and I must vehemently agree: what miserable people! Alas, once seated, such a party presents quite the conundrum. Any fuss they make will undoubtedly catch the attention of other diners, with problems pertaining to food preparation–however unfounded–especially prone to inspire undue suspicion from guests whose experience has been otherwise unperturbed. Yes, and once someone makes a big enough stink–god forbid they raise their voice with a few, choice negative remarks–the entirety of the dining room can expect “comped” drinks, desserts. Maybe servers aren’t contortionists, but lion tamers!

And perhaps that is the tension that makes the hospitality “performance” so gripping. A good server needs to charm the guest who complains about finding (their own) hair in their food. A good server needs to soothe the guest who had a bad day and just needs to take it out on someone “beneath” them. A good server needs to instruct diners on any number of things consumable or historical within the walls of their restaurant. In some cases, they bear the brunt of correcting a lifetime of illogical aversions and bugaboos that have spanned generations. If they are lucky, a good server will not only be able to balance all of this, but they will be blessed with the rare tables that respect them, that love (or are willing to love) the restaurant, that want to try new things and take suggestions for they understand the server is not a servant, but a frontline agent of the chef’s artistic expression and an absolute pillar of the dining experience.

Do not get me started on the bussers, bartenders, hosts, and hostesses, each of who endures a personal hell in their interactions with the same customers who torture their servers so. Alas, the pervading irony of the interactions I am describing is that every “bad” table drains the patience, the kindness, the very soul of their server. They dilute the experience for every proper table ready to exchange the positive energy that hospitality promotes. Thus, a talented server need succeed in putting out fires–effortlessly, gracefully, without a hint of resentment (for their manager will surely hear about that!)–while tending the flame inside them, the flame that is stoked (dare I say, rejuvenated) with every positive encounter.

I have come to call this flame the “spirit of hospitality,” and it is no fleeting thing, but more akin to an everlasting itch with which only some of us are afflicted. Scratching that itch means making someone happy, be it with a plate of food, a pour of wine, a kind word, or a mere smile. This spirit of hospitality helps explain why legions of talented people endure the misfortune of an uncertain, ephemeral industry. It helps explain why that one good table, that single magical encounter, can make an evening “in the weeds” worth it.

Critiquing servers in the same manner as stage actors is not a means to browbeat them more. On the contrary, it offers the first step towards educating the restaurant-going public on exceptional service at a technical, personal, and circumstantial level. Perhaps it may even serve as a means of correcting diners’ bad behavior (one can dream).

Until then, servers, take a bow!