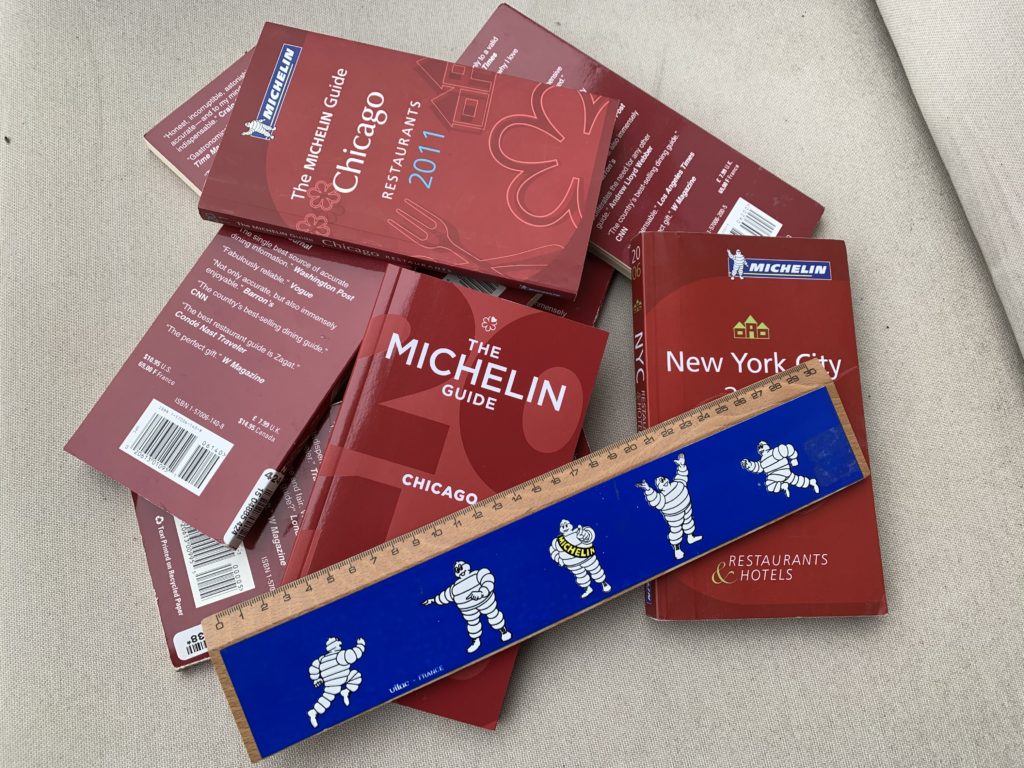 Every year, we wait with bated breath for Michelin to grace us with their rankings–yet how often do those restaurants really "measure up"?

I used tobe a star-chaser like you. That is, drawn to stellar bodies of the bibendouskind—gleaming asterisks, eagerly awaited, printed in each year’s Red Guide.

It is quiteexceptional, I must admit, to have come of age in the era in which Michelin hasdeemed America’s restaurants (well, some of them in some cities)befitting inspection. One may even be tempted to term 2005’s New York Cityguide a watershed moment, a “coming of age” for our national gastronomy. (Ofcourse, it must be mentioned that Tokyo did not receive its first guide until2007, when it immediately began its continuing reign as the most-starred city inthe world).

Yet theUnited States is not Japan, its cookery does not demand the same respect asthat of France, Spain, Germany, or even Britain (for whom Michelin haspublished guides for over a century). This “old world” possesses a multitude ofdistinct dining traditions—ever-changing, but whose lineages can be tracked forcenturies. Not that the cultures always possessed what can be called a highcuisine (or, if they did, one that could be sampled outside of thearistocracy). However, a bedrock of recipes and ceremonies, of artisanalproducts like wine, charcuterie, cheese, and pastry, provided fertile soil forthe establishment and refinement of restaurants into the sort of culturalproducts the Red Guide looks to showcase and rate.

Americancuisine is comparably rootless, driven by necessity and stunted by apuritanical prerogative that viewed food as altogether unfit as a vehicle forpleasure. Sure, Thomas Jefferson and Benjamin Franklin enjoyed their share offirst-growth Bordeaux. Yet a Francophilic upper crust does not a nationalcuisine make. In the simplest of terms, early America’s middling,meat-and-potatoes tavern fare became a blank canvas for a cornucopia ofimmigrant influences. From one era to the next, these groups, even if theyopened their own restaurants, hardly brought much of any grand dining traditionwith them. However, they had techniques and family recipes ready to reckon withthe continent’s awesome natural bounty.

Thedevelopment of a dining culture in the proper sense can be dated to around theturn of the twentieth century, when enterprising American businessmenconsciously replicated the grand hotels of Europe. This meant importing theiriconography, their style of service and organization, and, most often, one oftheir chefs. The French were recognized as the best, but Germans and Austrianscould do quite well, provided they had received the same rigorous training fromone of their country’s top hotelier schools. Their menus, stateside,predictably proffered European fare for the upper classes who could not onlyfine dine, but who traveled enough to crave the Continent’s delights.

Nonetheless,these chefs still had to source their ingredients locally and, if only bynecessity, found inspiration from regional game, seafood, and produce. In sucha way, the American bounty became slowly filtered through a sieve of importedEuropean savoir-faire. A slow trickle of “reputable” establishments brought ourwild frontier up to the standards of the international jet-set. Meanwhile, themost popular restaurants serving the American middle class fit the “oysterhouse” or “steakhouse” mold. In many respects, these establishments were evennicer then than they are now. Yet, there was little pretense or delusion thatwhat the cooks were doing could qualify as art.

Paris’sLost Generation of American expatriate writers—in the 1930s—and Julia Child estimableinfluence on national cookery­—starting in the 1960s—both, in turn, expandedthe influence of French fine dining in popular culture. A widening swath ofsociety became willing to pay for culinary delights, yet the case had only beenmade for the same Francophilic fare the Founding Fathers fetishized. Alas,gastronomy grew to thrive. The Grand Hotel style restaurants opened their doorsbeyond the most well-heeled, imported European chefs became celebrities andinstructors capable of inspiring a higher caliber of cooking in the home.

Throughimitating Europe in its tastes, the United States learned to “dine” like therest of the “civilized world.” The ethnic cuisines which now provide far morecolor to the national diet were relegated to the bargain bin: foods of convenienceand comfort, not art. For prior generations saw no point in fine diningdivorced from its cultural capital, its capacity to enable the purchaser tokeep up with the Joneses. Such a prize seemed like ample justification fordress codes, table manners, and all the frills of ceremony which perplex thefirst time fine diner to this day (of course, where and when those frillsremain).

The earliergenerations of American fine diners entwined the art so closely withconspicuous consumption, with its ability to distinguish one’s refinement and tastefrom the barbaric masses, so as to almost ruin it altogether. Rules wereenforced both in conduct and in cooking that stifled the creation of any trulydistinct national style of dining. Only in the past decade (maybe two) has thishoity-toity hangover finally lifted. A style (many styles) of fine diningdivorced—in varying amounts—from European tradition has risen. The ground hasbeen cleared for the multitude of ethnic cuisines that make up the tapestry of Americancuisine to, at last, flourish with the full range of artistic expression thatcomes with the embrace of a fine dining structure. At the same time, the “NewAmerican” genre has opened the door for chefs to pick and choose their influencesas broadly as possible. Other than an attention to local sourcing, this styleof cuisine can only be defined by its manner of resisting any easy definition.

This is allto say, these American Michelin Guides are very much a throwback to an era of inferiority.Whatever “coming of age” they represent on a global scale is not worthshackling our culinary identity to the opinions of a foreign corporation thatshirks any form of transparency.

Let them beused by tourists too overwhelmed to deeply research this country’s mostdistinct and charming dining establishments. For the French have their morerigorous Gault et Millau guide, the Italians their Gambero Rosso,the Japanese masterfully use Tabelog, and even the United Kingdom has takencontrol of their dining destiny with The Good Food Guide.

So, I ask,when will we stop outsourcing American “taste” to those who have never proventhemselves worthy of wielding it? Star-chasing reduces dining to its mostbastardized, conspicuous consumptive form: a checklist, an Instagram post, apicture with the chef. Michelin teaches amateur gastronauts to outsource theircritical thinking to someone they do not know and will never meet. They shiftthe public’s eyes towards the clouds, obscuring the great cooking in their ownneighborhoods that is worthy of support.

The arrivalof Michelin Stars is the starting point, not the end point, for Americangastronomy. It’s a signal to the world that we have arrived (in some form). Butwe must resist the temptation to bow to these interloping asterisks, to waitwith tongue wagging each year to be told where we should be eating.

The realchallenge, the real gastronomic milestone is to move beyond any alien appraisalof our culture and define it ourselves. To embrace and reconcile the countlesspieces that, if they are ever put together, could finally give definition tothe term “American cuisine.”

There is noquestion that the United States has the best food in the world.