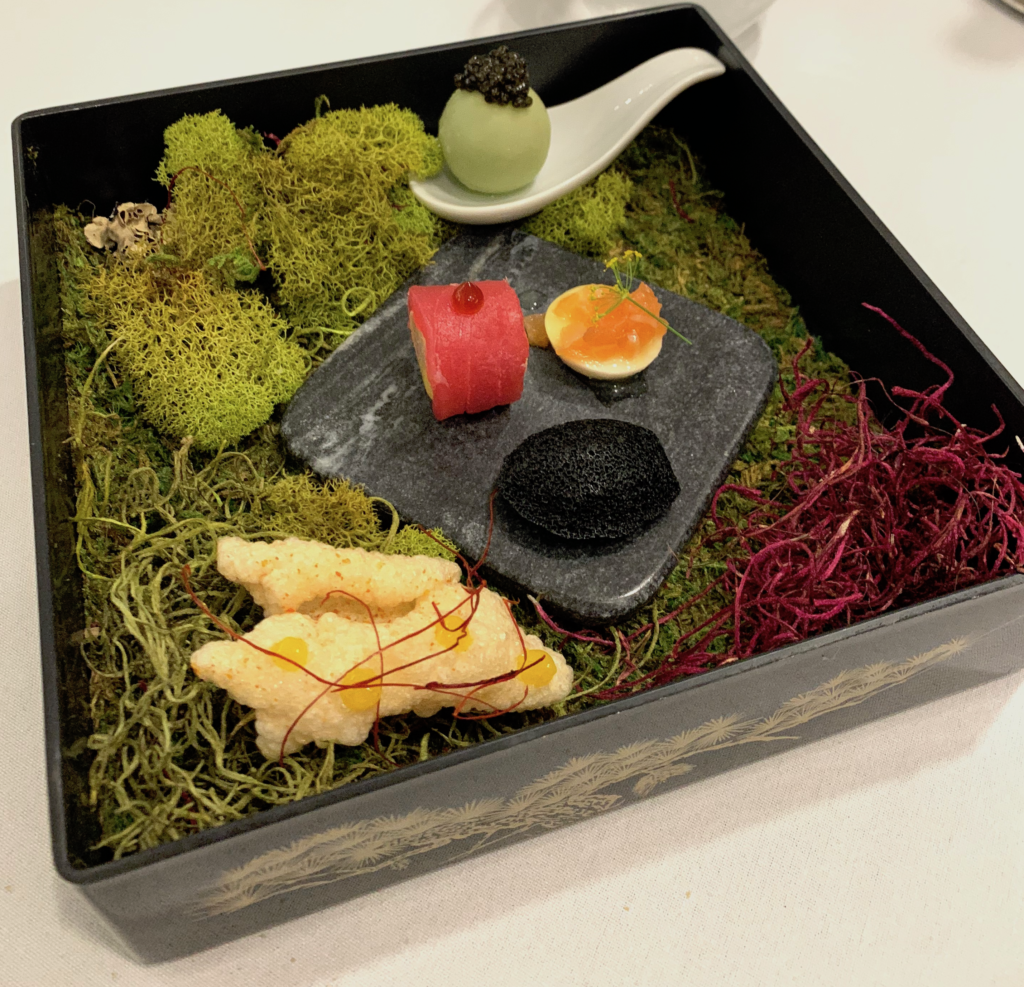 Trevor Teich's "bento box" is one of the chef's signatures from his pop-up days.

CLAUDIA(stylized, comme ça,  in allcapital letters) offers Chicago’s newest tasting menu. Chef Trevor Teich boastslocal experience at L2O, NoMi, Sixteen, and Acadia along with a sojourn atPierre Gagnaire’s Twist in the Mandarin Oriental Las Vegas. Though Chicago—kneedeep in the national obsession with fast casual food—suffers from a dearth ofupscale dining openings, Teich’s is a weighty resume that shows a clearcommitment to applying modern French technique to American ingredients. And, at$185 for a 10-course menu, CLAUDIA is clearly competing with “big dogs” likeSmyth and the aforementioned Acadia.

Teichgarnered praise years ago with a pop-up rendition of the restaurant, servingseatings of 16 diners at a time for one or two weekends a month. This iterationran from 2015 to 2018, earning two stars from the Tribune,  before a deal to open a brick-and-mortarrestaurant fell through and the chef absconded to Sin City. Teich announced hisreturn in March of this year, raising some $38,000 via Kickstarter over thecourse of a month to secure a “dream” location “nestled between Lincoln Squareand the…Chicago lakefront.” The chef then returned to Chicago in late August,with CLAUDIA opening its doors just two months later.

Well, thedoors weren’t exactly “open” upon my visit this past weekend, the restaurant’ssecond night of service. You see, that hallowed location near Lincoln Squareseems to have disappeared, and the space has been substituted for a conferenceroom on the second floor of a corporate building at 540 West Madison in theWest Loop. Yes, the restaurant is actually a conference room by day,catering to tenants like BMW and Caterpillar with projectors and multimediasetups galore. A space is merely a space: just one part of the hospitalityequation and certainly one that is hardly disqualifying (should food andoverall hospitality excel). I do not know where CLAUDIA’s previous pop-ups wereheld, but I imagine that location was not nearly as nice as the one at 540 WestMadison.

However,the restaurant’s location within a secure corporate building did presentseveral hiccups that might rub customers expecting Michelin two-star comfortthe wrong way. As previously alluded, the doors to the corporate building donot open without a keycard. This is understandable, given our reservation wason a Saturday evening. Nonetheless, we were left pulling on a revolving doorthat wouldn’t budge and standing outside until a member of security saunteredover and opened the two sets of doors leading into the lobby. Once there, wefollowed the e-mailed instructions to ride up the escalator and approach the deskin front of the elevator banks. Each of us handed over our IDs, as the fullnames of each dinner guest needed to be confirmed 24 hours in advance so thatthey may be logged with security. Thankfully, they did not feel the need toprint nametags for us to wear.

Around thetime that the last of us had our identity confirmed, CLAUDIA’sG.M.-cum-sommelier made his way to the lobby from the restaurant space. Hestood on the other end of the automatic gate, greeting us each with a handshakeafter we stood in file for the doors to whir open, then close, then open again.I do not mean to express that dealing with building security was a particularlytorturous affair, yet it felt good to finally be in the restaurant’s hands andled towards a more curated, luxurious space. That space, as you already know(but we, of course, did not at the time) laid up one more escalator in theconference room. One diner in my party saw the room for what it is almostimmediately, remarking that he’d been in such faceless places plenty of timesduring the course of his work.

There werefour tables draped in white tablecloths at the far end of the room, overlookinga brightly-lit wall of abstract glass “bubbles” in greens and blues. No doubt,it looks pretty, but the wall was meant as an anonymous backdrop for businessevents and does not necessarily connect to anything CLAUDIA is doing. It isvaguely “contemporary” and prevents the space from seeming much more sterile.Still, the tables at which we were seated comprised no more than a third of theroom, with acres of space unused between us and the entrance. The chairs werecomfortable but clearly still, my chum pointed out, of the stackable officevariety native to such a building. At the opposite wall from us, counters andcabinets were used as a staging space for the front-of-house staff, surfaces(one imagines) more typically used to lay out boxes of bagels and donuts.

With thesetting established, I will mention two more gripes. The building was cold, quitecold. The staff explained that they were at the mercy of a massivecorporate building, caught (as they often are) during the transition from thelast rays of warmth into the deep chill of Chicago’s autumn. The restaurant wasready to offer pashminas to whoever needed them; however, the chill certainlyonly worked to call even more attention to the unorthodox space. Such was alsothe case with an announcement made near the start of the meal that the men’sbathroom was being serviced and would be unavailable to us during the course ofexperience. Again, this was presented as consequence of the building. Nevertheless,should we need to relieve ourselves, a member of the team would lead us to theladies’ room and ensure it was empty. This, thankfully, was not necessary, asthe men’s bathroom would be reopened by the time any of us needed it.

This is allto say that we, as guests, were more focused on CLAUDIA’s location and its“quirks” than anything to do with food, wine, or revelry. Posting a member ofthe staff at the building’s entrance would have no doubt made for a smoother,more luxurious lead-in to 540 W Madison and all its charms. Otherwise, whenconfronted with unexpected difficulties, the team offered solutions and did thebest they can. This was admirable, and I certainly cannot criticize the natureof their response. Rather, I question how desperately this dining room waschosen, how permanent a home to the restaurant it will be? Just what exactly isgained from calling this place a “restaurant,” rather than a new extension ofthe pop-ups Teich made his name with? At its price point, CLAUDIA cannot affordto abandon any attempt at offering a proper ambiance. Lacking it, they mustlean heavily not just on the quality of food, but on the ability of the smallservice team (two servers, along with the GM/sommelier) be both mechanically perfectand able to brighten up the space. It is a tall order, but we generally foundCLAUDIA to be up to the task.

Aspreviously mentioned, the restaurant’s general manager doubles as itssommelier. To that point, CLAUDIA is currently “BYO,” and so guests must relyon the sommeliers suggested pairings. They also have the option of dropping offtheir bottles a day or two before dinner to ensure proper wine service. Thiswas all handled exceptionally well, as the recommended wines spanned a range ofregions and price points but centered around stylistic expressions like“oxidative” or “mineral driven & high acid” that made the pairing logicclear. The handling of the wines, also, was clearly at a fine dining level. Thesommelier used his own judgment in opening and decanting bottles before dinnerand expertly managed the temperature and ordering of the wines throughout ourmeal. For this service, customers are made to pay a $35 corkage, which,nonetheless, I think is a fair price. A proper wine pairing is slated to beadded in the near future, and all signs point towards it being just aswell-managed are the “BYO” process is now.

In his roleas general manager, the sommelier also exceled. Though I wish he had metus—rather than a security officer—at the building entrance, I can see how thereis simply not enough staff to justify him being so far away from the diningroom. Rather, he met us at the elevator banks with a firm handshake and brighteyes. Well dressed, he whisked us to the dining room and welcomed us withprofuse thanks for joining them on opening weekend. And it did not end there:he took our water order, poured our wine, refilled glasses, and whisked platesto-and-fro the table as necessary. The G.M. led from the front, and the twoother servers working the room rose to the same level. Nobody seemed rushed orpanicked; everyone was unmistakably present, always making eye contactand smiling and responding to even the most hushed words of thanks as theywaited our table. This positive energy made the various building-related issuesmuch easier to swallow and worked to build a sense of luxurious service in aspace that did them no favors.

As to thefood, it was imaginative in its concepts and combinations but focused in itsexecution. Owing to his experience in fine French restaurants, Teich’stechnique was close to unerring during the course of the menu. His “Bento Box”of tuna-foie, salmon-liquorice, scallop-cracker, and squid ink madeleine biteswas a worthy holdover from CLAUDIA’s pop-up days (Phil Vettel remarked thatTeich will likely never be able to stop serving the tuna and foie grascombination). A pumpkin panna cotta that followed was wonderfully smooth anddeeply flavored, forming the perfect canvas for sprigs of seaweed and orbs ofsmoked trout roe and melon. A “lasagna of crab” caught my eye when surveyingthe menu and proved to be a far more refreshing, palate-cleansing,citrus-forward dish than expected. Not that it wasn’t well-made, but the flavorof the crab could have featured more primarily against the passion fruit andpickled lemon.

A dish ofeel was impressively cooked, though accompanying flavors of grapefruit andginger seemed to mirror the citric notes of the previous course a bit too much.“Snails in the Woods,” with its evocative title, tantalized us with thecrispness of the snails’ tempura breading. Nonetheless, the shaved Burgundytruffles and “truffle dirt” were not aromatically or flavorfully expressive (aproblem that has surely dogged many of the Chicago restaurants serving trufflesthis fall, so I cannot fault CLAUDIA too much). In contrast, a dish of butterpoached lobster with butternut squash, coconut, and vanilla was a real stunnerthat even impressed one of my lobster-hating companions. The final savorycourses of grouse and American wagyu filet were like the ell and snails:perfectly cooked but lacking just a bit more refinement and intensity of flavorfrom the accompanying ingredients. Bread service came by way of an admirablycrispy baguette paired with salted butter. Much to our enjoyment, both breadand butter were replenished multiple times during the meal.

Thedesserts—a beet-and-olive popsicle, pulverized goat cheese with bacon icecream, and a ginger custard—were well-made and inventive in their combinationsof flavors and textures. Nonetheless, their appeal was dulled just a bit by thefrigidity of the room—surely a circumstance that will not likely be repeated onother occasions.

Overall,CLAUDIA excels in turning an unconventional, at times uncomfortable space intoa bonafide fine dining space. There’s no question that some of the quirks willbe a turn off to customers expect the polish that such a price tag entails.However, there is also no question that Teich and team are talented, they’reputting their all into running the restaurant, and the food, ultimately, cangive one-star establishments like Temporis a run for their money. It will beinteresting to see how Teich’s menu changes over the course of the season (theG.M. said we can expect changes in about a month’s time) and just how permanentthe spot at 540 W Madison will be.

There are legions of Kickstarter supporters the team will have to accommodate in the weeks and months follow last weekend’s opening. How they will react to the “restaurant” where their money went is a question I cannot answer. Yet, if they give Teich’s food a taste and give his team a chance to soothe them, I think they might just leave pleased.