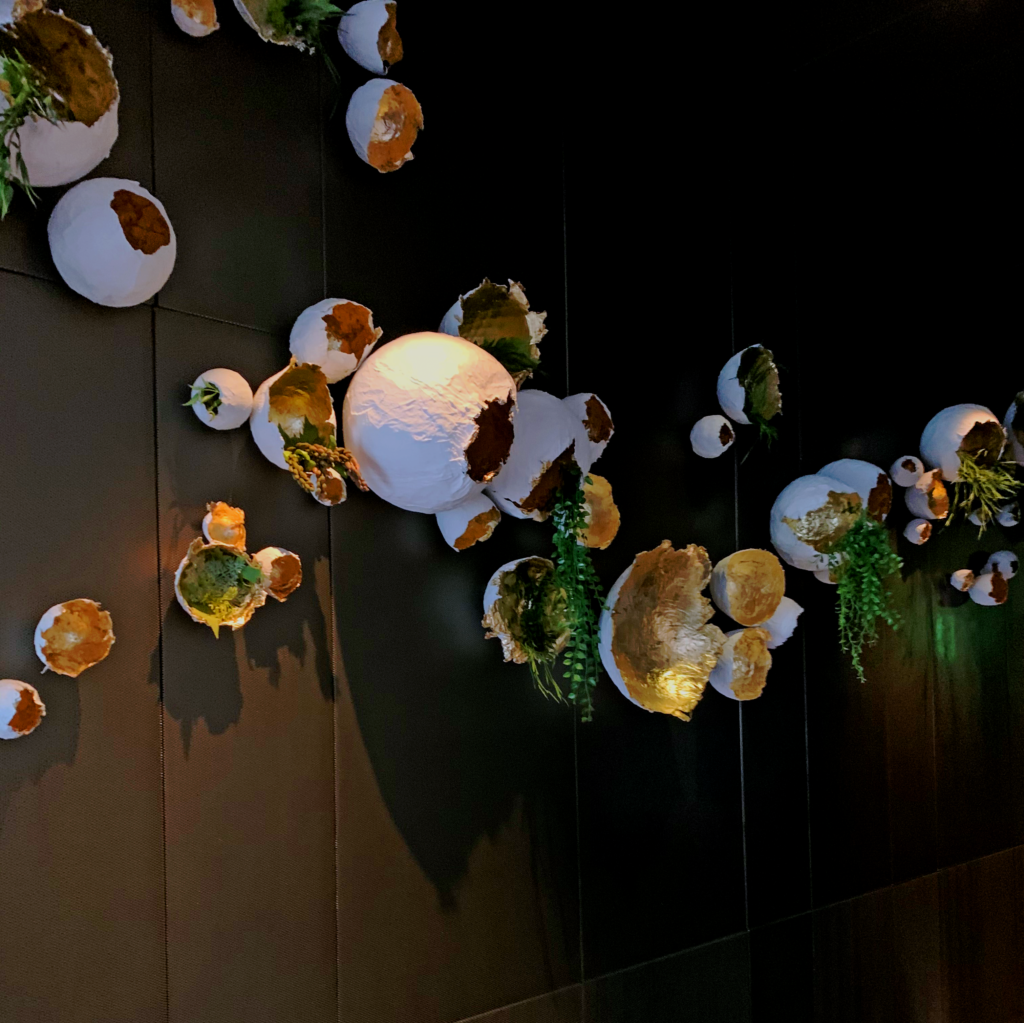 If the eyes are the window to the soul, then the soul must be the engine of hospitality. Not the mechanical side of service, mind you, which concerns itself with timing, technical mastery, and the memorization of any and every detail that could possibly concern the guest. Rather, the eyes provide a pathway towards sensing sincerity–that is, the spark of an emotional connection which can form when a host or hostess places someone in their care and that someone, thoroughly present and engaged in the experience, emits due appreciation in return.

“Smile more,” so goes the stereotypical advice, and, in the era before face coverings, that was often enough. The American consumer is king (or, at least, they still feel that way), and the king’s subjects–however filled with fear or disdain they might be under the surface–had better not rain on his majesty’s parade. To wit, in most retail or hospitality settings, any given employee is merely a mediator between the customer and their chosen product. Any given manager, likewise, is simply a conduit towards receiving better service, a discount, free stuff, or–perhaps–is just a punching bag on someone’s bad day. One can tell, especially among those one is closest to, when a smile expresses pure joy or, otherwise, is only put on. However, the nature of smiling in hospitality settings–both for staff and for customers–is so routine and so performative that all ultimate meaning has been stripped from the gesture.

These smiles may sometimes be sincere, sometimes not, but both parties have endeavored to accept the signal at face value: “I am happy, you are happy, there is no problem here.” No fussy customer has ever, you think, taken issue with the genuineness of the gesture. It is, in some final sense, a show of submission (and one, perhaps, for a particularly cruel sort of person, that provides an added pleasure when it contradicts one’s internal state). Just the same, no hospitality professional has ever probed a patron’s sheepish grin for the negative emotion it might be obscuring. You often find yourself reporting that a dish was “good” or “pretty good” when it may have only been average (or worse). In contrast, a truly great dish inspires an outpouring of emotion–of naked pleasure–that could not easily be faked. In this way, you rely on the staff to read between the lines while they respect your right to avoid outright criticism. The smile, thus, becomes a shorthand for “everything is okay.” It establishes the baseline of the experience whereas the eyes offer something more.

You felt inspired to write this article after a rousing meal at Yūgen this past weekend. The restaurant, which was somewhat born out of controversy, did well to earn its Michelin star last year. It took its time reopening during the pandemic, yet executive chef Mari Katsumura has struck upon three thoughtful concepts that are among the most exciting in Chicago at the moment: a take on a “grab and go” Japanese convenience store in their former lounge space, a tiki / yakitori menu on their new patio, and the latest iteration of Yūgen’s tasting menu in their redesigned dining room. The food and drinks you tasted on both the patio and the tasting menu were impeccable. Katsumura has shown incredible growth and refinement in her flavors since the restaurant’s opening–not to mention a sense of playfulness and an overall aesthetic that is firmly her own. You think she is already getting closer to that second Michelin star, and, notwithstanding that, Yūgen is one of only few restaurants (along with Kyōten, Topolobampo, and Ever) that have found a way to offer more unique and luxurious experiences during the pandemic (rather than compromising creative values for the sake of wider appeal).

Yūgen’s success comes on the back of unerring service under the command of a newly-hired service director who cut his teeth at Eleven Madison Park, Gabriel Kreuther, and Sushi Nakazawa in New York City. Yet this director, as estimable as the hospitality he rendered was, did not inspire this article. Rather, it was your captain that evening, a woman whom you think had been with the restaurant since before the pandemic, whose service struck you.

In a dining room such as Yūgen’s–one with the requisite ambiance and aspirations to be termed bonafide, formal fine dining–sleekly-suited servers operate at the pinnacle of technical mastery. They pour drinks and pull out chairs in total synchronization. They pour sauces to garnish dishes and even shave truffles (being careful to appear generous but not profligate). As a diner, seeing the staff whirl around in such a way impresses upon you the feeling of sitting at the center of a well-crafted watch. The mechanics are unerring, dependable, but might they be cold? Does the deferential nature of such subdued, exacting service deny any chance for a human connection to come forth? The secret is in the eyes.

While the “customer service smile” has already been stripped almost entirely of any emotional weight, face coverings have further denied diners the chance to forge a connection with their caretakers. Pre-pandemic, it was easy for both parties–customer and server–to get by with half glances and mumbled praise. Facial gesture, at the macro level, told everyone what they needed to know: “smile = GOOD EXPERIENCE” or “frown = BAD EXPERIENCE.” (Perhaps, you would also include “smile = GOOD SERVER” and “frown/smirk/visible frustration = BAD SERVER” from the diner’s perspective).

Hospitality professionals, of course, retain the benefit of observing their guests’ expressions at the table from behind their own masks. This is not a question of communication, for which superficial smiles and frowns do just fine. Rather, you talk of the deeper bond between “server” and “served,” the eternal dance of hospitality, of hosting someone as if he or she were in your own home. It is a question of both sides, thoroughly present, giving fully of themselves and sanctifying something precious: full appreciation of the moment, of nature, and humanity’s place therein.

Some restaurants, such as Smyth, embrace a conversational style of service that allows for each individual employee’s personality to shine organically. The mood in these kinds of dining rooms is not intimidating or dramatic. Instead, the nature of the experience is one of overwhelming warmth and comfort. The servers, empowered to express themselves, invite the same from their guests. Add incredible food and wine to the mix, and one has a recipe for a peak hospitality experience–masks or no masks.

Restaurants such as Yūgen, in contrast, opt to create spaces that are abstract and minimalist. It is a stylistic choice, and one that forms a fitting partner for certain cuisines. These restaurants prize the sort of faultless precision you mentioned earlier, and the synchronization that is so pleasing to the eye demands that staff constantly remain at the ready to deliver it. Warmth is not discouraged–and, in truth, interactions are unerringly pleasant–but conversational ease and flow often suffers when a restaurant’s service priority is to hit all the performance marks for all the tables all the time. In these restaurants, the chef, as well as managers and sommeliers, may be more empowered to loiter and provide that extra-special personal touch. However, captains and servers–however pleasant–may come across more like automatons in their facilitation of the meal’s larger artistic goals. The cuisine is the main event, and they are merely the stagehands that keep the show on the road.

This is all well and good, and a “hands off” approach can certainly lend itself to special meals where all the action is focused on the table. The diners’ own conversations with each other can be quite fulfilling in their own right too. Nonetheless, in denying a deeper understanding between the “server” and “served” to flourish, the restaurant runs the risk of becoming a mere means to a fundamentally consumptive end. At what point, then, does the servers’ role transform from delivering food, from guiding you down the typical track of the “guest experience,” into something transcendent? The secret, especially at this moment in time, is in the eyes.

There may no longer be any opportunity for servers to stay at your table and make small talk–that is, to engage in the little niceties which illustrate some piece of each individual staff member’s soul. Likewise, face coverings–as you have described–deny diners any chance at appraising the sincerity of a server’s smile. (Not that such a signal can be relied upon to stare into someone’s soul, yet you like to think certain facial expressions emit an unmistakable pride and genuine presence that strike to the emotional core of hospitality).

No, in this day and age we may only rely on reading those two irises, those two pupils, peeking out at us from their perches atop a surgical mask. Do those eyes dart towards the next table as the your interaction ends, or do they linger? Are those eyes strained? Do they anxiously await whatever request could be coming, or do they glisten with warmth, with ease, with the promise that nothing in the world (let alone the restaurant) could be more important than you at this very moment? Do the eyes pierce you with their honesty, their vulnerability? Do they strike your own eyes, quieting your mind and making quite clear–just for a moment–that this being before you is a kindred soul? Your captain that evening at Yūgen possessed such a set of eyes, and they electrified every interaction–however minor–throughout the meal.

In the age of airborne viral transmission, the relationship between “server” and “served” has never been more consequential and, ironically, impersonal. You are asked to place your life in the hands of someone you cannot really see. The trust one implicitly gives to the chef handling the ingredients on their tasting menu now must extend to each and every member of the team. At a time when fine dining forms the most frivolous of luxuries, mechanical perfection becomes the expectation–for your life and their livelihood depend on it. The human element–formerly often ignored–is now highlighted as a vector of infection. Now we do want to be served by robots: sterile, precise, impeccable.

But we do not have that luxury. We must trust and be patient with each other, particularly those in the hospitality industry. We must acknowledge that we bear the risk of going out not for mere food but, principally, to support those who have made caring for us their calling. Do that, and you may be surprised that, in these darkest of days, the true soul of hospitality finds a way to shine through.